The latest statistics from CLIA, released earlier this month, show significant signs of growth within the cruise industry in the UK and Europe throughout 2015. It certainly was a very exciting year for the industry, with many new arrivals in both the ocean and river cruise sectors. Royal Caribbean introduced their spectacularly innovative new vessel, Anthem of the Seas, whilst P&O Cruises launched the largest vessel to ever cater specifically for a British market.

With regards to the river cruise market, 2015 saw the introduction of 19 luxurious new vessels to the industry. 170 CLIA member line river ships will sail throughout Europe this year and this will be increased by a further 18 new vessels by the end of the year. Signs of growth are evident across a range of statistics published in CLIA’s latest release and, this week, Cruise Franchise takes a closer look at what they could mean for the British cruising industry. 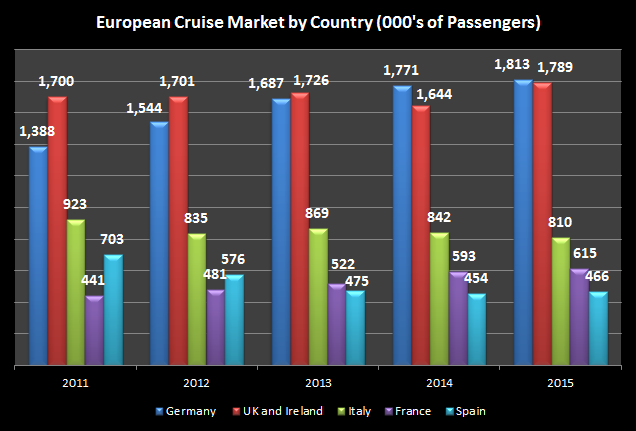 Despite a dip of 82,000 passengers between 2013 and 2014, the UK cruise industry has bounced back significantly by a rise of 8.8% (145,000 more passengers). Whilst this wasn’t quite enough to see the UK retain the largest percentage of the European cruise market, it puts them within touching distance of Germany.

This will no doubt have been helped by the introduction of P&O Cruises’ Britannia, which launched in March 2015. Meanwhile, the French market is also enjoying continuous year-on-year growth, which remains a popular option for those looking to avoid catching a flight in order to board their ship. 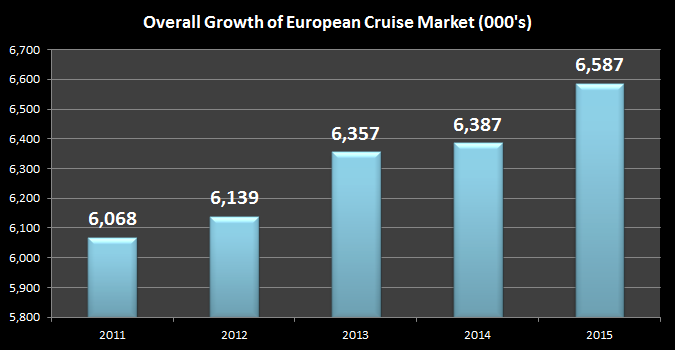 With more and more vessels being introduced into the industry and more cruisers embarking on cruise holidays for the first time, the European market as a whole continues to grow. Over the course of the last five years, the overall number of passengers has risen significantly, with 500,000 more people opting to embark on a cruise in 2015 than in 2011. The launch of new ships in 2016 including Holland America Line’s Koningsdam and Royal Caribbean’s two new vessels, Ovation of the Seas and Harmony of the Seas, will see this figure continue to rise. 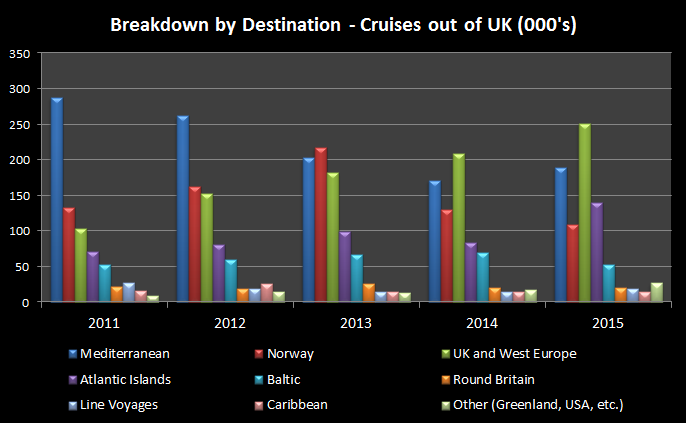 The UK is ideally situated for cruises to Western Europe and the Mediterranean and this is clearly depicted in the graph above. Although cruises to the Mediterranean have seen a slight dip in recent years, they remain extremely popular. Itineraries to the UK, Western Europe and Atlantic Islands have also seen continuous rises in the number of passengers in recent years. The UK is ideally situated to embark on a cruise to the Canary Islands, Madeira and Azores. Understandably, far-flung destinations, such as the Caribbean, receive fewer passengers on cruises out of the UK, but the figures are consistent. 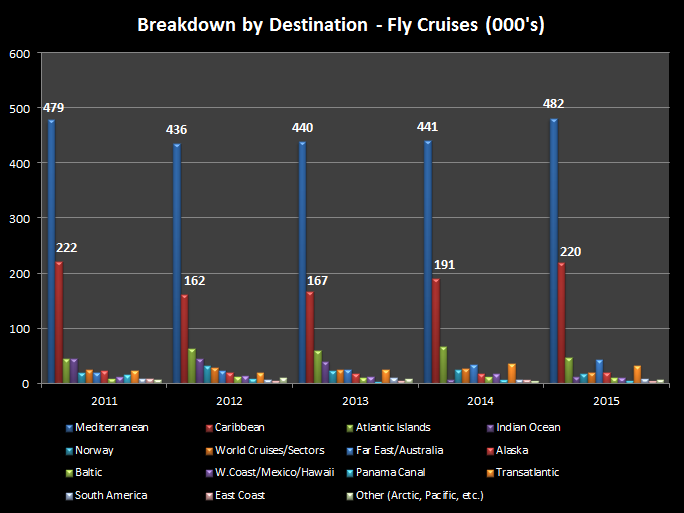 When it comes to fly cruises, the Mediterranean and Caribbean are, understandably, by far the most popular destinations. Many Mediterranean cruises sail out of popular ports such as Barcelona and Civitavecchia (Rome); whilst Caribbean cruises sail out of Florida or the Bahamas. But it’s worth looking at some of the other destinations which are gaining a larger percentage of passengers. The Baltic remains the second most popular European fly-cruise destination among UK passengers and the third most popular overall. With more lines opting to position their ships for an Asian market, this continent has become more accessible than ever before for UK cruisers.

The number of British holidaymakers embarking on a river cruise rose by 10,000 last year, surpassing the 150,000 mark. Although new itineraries along rivers such as the Mississippi in the USA, the Irrawaddy in Myanmar and Chobe in Southern Africa are rising in popularity, European itineraries maintain 87% of UK passengers. The River Danube soared in popularity with a 38% increase, whilst the Rhone and Seine Rivers grew by 30%. More vessels are offering amenities such as spa facilities and dining venues on board, as well as staterooms with balconies.

We provide analysis, insight and opinion to help paint a better understanding of cruising and maximising the possibility of securing bookings. If you love cruising and would like to turn your passion for travel into an exciting career opportunity, why not consider operating your own business through the Cruise Franchise?

Our friendly and knowledgeable team are ready to answer any questions you may have. For more information, contact us via the Freephone Number above or complete the Online Enquiry Form.

Thank you! Your submission has been received!
Oops! Something went wrong while submitting the form.